This report was written by Delia following her magnificent achievement in completing this ride:

I got to the Olympic Park in plenty of time to start “loading” for my 8.05am start time and found out that the route had been shortened to avoid the Leith Hill/Box Hill loop. Once on the road it became obvious that the organisers had made the right call. But to satisfy honour, I now have no option but to put my name in the hat to do (hopefully) the full 100 miles next year – ballot opens on 18th August.

I stopped worrying about a decent time when I got stuck in Richmond Park behind a crash – I could see the ambulance lights in the distance. We were waiting and then walking for quite a while in torrential rain so I got rather chilly and decided not to take any risks once we got underway again. There was a lot of flooding around the Ripley area so it was single file through the highest point in the road in quite a few places and burst water mains sending rivers of water across our path! I think the late starters got the worst of the flooding as it had accumulated by the time we came through.  According to the official website, my time for the 86 miles was 06:50:25, which can only be described as exceptionally safe and steady!

It is fair to say I could not have attempted this ride without the time spent with the CTC Chelmsford City Group over the last year – thank you!  Over the next few weeks I will be taking a break from cycling to get “walking fit” for a holiday to the Dolomites in early September. Hope to see you again for some rides in the Autumn. 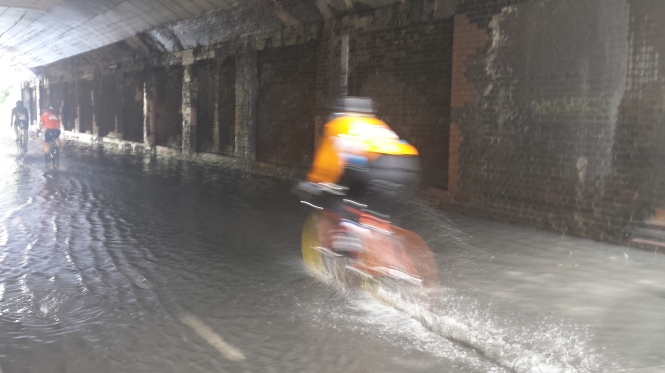