Just a few tracks of recent rides and a couple of photos. 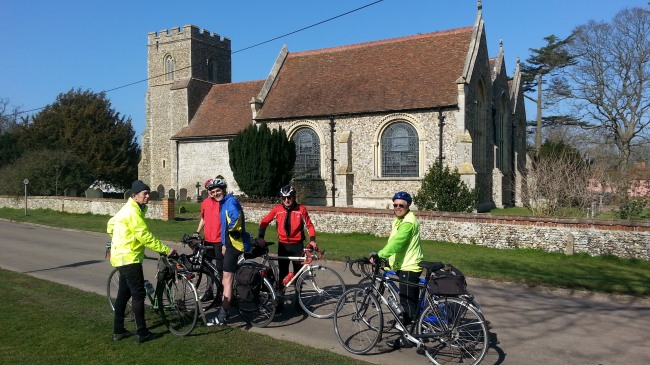 After lunch on 16th March

Eight riders set off, into a stiff westerly breeze, having seen the Met Office forecast and therefore not expecting any bad weather before lunch. After the first squall at Writtle 2 turned back for lack of waterproofs and the rest donned our wet gear and headed for Sawbridgeworth, with the wind “on our noses” slowing us all the way. Tall black clouds towered up in front of us but there was plenty of sunshine amongst the showers and the woodland areas were lined with primroses and daffodils. You could sense that a little spring magic was happening.

Still under that spell, three of us carried on to lunch at Allens Green making a loop round Gangies Hill and riding the bridleway, (which was surprisingly firm and not at all difficult) – up to Perry Green. We arrived at lunch just before 1 p.m. finding the Queens Head welcoming as ever and excellent value. A large group of cyclists from the Bishops Stortford club gradually arrived, filling out the public bar area with wall-to-wall blue and red Lycra. After lunch we rode the small lanes, counting the steady stream of jets taking off towards us from Stansted, banking steeply into 180 degree turns low over our heads. This muse was sharply interrupted by loud thunder and a stinging hail, clipping our ears us from the left. We pressed ahead across Hatfield Forest and on to White Roding where we were thankfully able to dry out at Bretts Buttery before the last leg home.

Hi. I’ve been out both of the last 2 Sundays and need to keep my readers up to date. Both rides had a few similarities in the shape of a bit of off-road in each and the presence of a persistent westerly breeze. On the 9th Dave Russell was the leader of six of us on a very bright, breezy run to Dunmow and onward to Spellbrook. The Tea tree at Dunmow continues to provide excellent VFM and a 60s style juke box. The outbound ride was punctuated by a cultural stop at the blue plaque on the bridge near Butchers Pasture and a ride through the bridleway through Little Easton Lodge which is mysteriously labelled “no public right of way” by the land-owner despite being also marked otherwise on the Definitive Map. Anyhow, it must be pointed out that democracy was rigorously applied to the decision to attempt to ride this track. All agreed. but after passing the point of no return, things turned boggy and indeed boggier. We walked the edges, pushing our bikes through the “Chocolate Brownie” and everything connecting with the mud became not surprisingly, muddy. Regaining terra firma we all had a good scrape off and the ride resumed. A special sympathetic mention to John, here, whose speedo/computer became dislodged by a briar and was lost to the mire despite much searching! The busy chain pub at Spellbrook fitted us in with the minimum of fuss, given that it was packed out and we hadn’t booked. A good well thought out spin, all considered.

The following Sunday (just past) we went to Perrywoods, Layer DLH and Heybridge in that order. I led, and its worth mentioning that 18 riders were assembled at “Elevenses”. Mel; has kindly penned a report and that follows:

A day of gorgeous sunshine but a bit nippy at first with a wind from WNW. Good weather is not a guarantee of getting loads of riders but we had about 13 at the start.

Adrian led us out via Sandford Mill to Little Baddow where he threw in Colam Lane to warm us up! For the next few miles we were plagued by time trialists shouting keep to the left. After an up and over of Wickham Bishops we arrived at Perrywood Garden Centre for elevenses. It was incredibly busy but the café staff were very efficient.

We lost a few riders after elevenses but picked up at least five going onto lunch. After last week’s off-road section you would have thought we would be wiser! Adrian took a gamble and we used a piece of off-road NCR1, which fortunately was fairly dry. At our most northerly point we were in the lower parts of Colchester so I took the opportunity to check if my son was in. He wasn’t but I finally met him at our lunch venue, The Donkey and Buskins.

After lunch eight of us made our way back via Tiptree to Chigborough Barns for tea. Wilkin of Tiptree has taken over the tearoom since my last visit.

Some of the ride there was into wind and Diane was already having trouble with hills. Down Goldhanger Road she got cramp and told me to go on leaving her with Dave R. I finally caught up with the rest of the group in Heybridge and explained what was happening. We surmised there was little we could do and were relying on Dave to take her to his home to give her a lift back to Billericay.

With no rain lately we didn’t expect water right across the road in Bumfords Lane. After the weather earlier this year a couple of inches of water didn’t frighten us!

Martin’s knowledge of cycle paths helped us get down from the Boreham Interchange to the Chelmer cycle path so Norman and I could recover our cars at Meteor Way. Car to car my mileage was 61 miles.

Ten riders gathered at the Town Hall for today’s ride led by Brian and Jeanette. The weather was fair with sunny periods and a moderate southerly wind.  Our elevenses stop at the White Hart tearooms in Great Sailing would have been a rather short ride so Brian took an indirect route making the first leg up to 20 miles or so.  We had not visited these new tearooms before but are happy to report we were very well looked after.

Beryl had joined us for elevenses and came on to lunch at Finchingfield by which time we had covered almost 35 miles and we were joined by John.

The wind was picking up for our return to Chelmsford making it quite hard work. Adrian needed to get back quickly and set off ahead of us, although we were never far behind and kept seeing him a few hundred yards ahead right up to just past Littley Green.  I was struggling a bit towards the end having still got a cough from recent ‘flu and I dropped about 50 metres behind as we went under the Chelmer Valley Route approaching Howe Street.  I was missing the shelter of the group which had helped me back from Finchingfield, but nobody looked round to see where I was even though I could see them until just after Great Waltham. Anyway I got home OK if very tired, but sorry that our normal CTC approach to weaker members seemed to have lapsed.

Anyway it was a great day out – many thanks to Brian and Jeanette! 58 miles door-to-door for me.