I am down to lead tomorrow, but I’ve had a cold and cough for two weeks and it’s not gone yet. The forecast for tomorrow is very poor, with rain for 4 or 5 hours. It would not be good for me to get cold and wet so I will not be riding.  Dave and Adrian are aware.  Sorry!  Martin

PS at 9.30 on Sunday. Went to the start but no riders turned up. Either everyone is reading the blog or have heard the weather forecast!

An unexpected day off today – work in darkness due to a flooded electricity sub-station.  This latest deluge turned the Fairglen junction (A127/A130) into a small river and, by the time I made the return journey (by car, not by bike…I’m not stupid) part of the roundabout had been closed off.  Hullbridge/Hockley/Rawreth/Battlesbridge seemed to be the worst affected local roads but things seemed OK around Chelmsford.

By lunchtime, the rain had cleared and the sun came out.  Only one thing for it, then.  I’ve never tried bog snorkelling and I can’t say it’s likely ever to appear in my ‘bucket list’, and it was looking increasingly unlikely that I would dip my toe in the water this afternoon of that particular curiosity.  In fact, the first half of my usual short ride around the Hanningfields was fine.  The only properly flooded section of road came on Middlemead past the play park towards South Hanningfield Village Hall, but this is the section of road where the pedestrian path begins to run alongside so, in the interests of sanity, for 200 yards, I broke whichever Highway Code rule forbids riding on the pavement.  Robert Goodwill, Minister for Cycling, has recently advocated tolerance for pavement cyclists so I think I’ll be OK.

All fine through East Hanningfield and, not wishing to risk Butts Green Lane towards Sandon, I decided to head back towards West Hanningfield.  I then came across this: 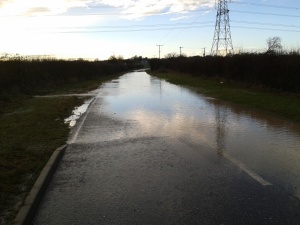 It’s never an easy decision, is it?  I decided the grass verge would probably be OK.  At least there, only pride could be bruised.  This was a mission requiring absolute focus.  Unwanted spectators within a 4×4 would almost certainly herald a small tidal wave, loss of concentration and deep humiliation.  In the end, I got half way across and took temporary refuge on a small rectangle of concrete.  At this point, a van caused some gentle lapping, but neither of us came to grief: 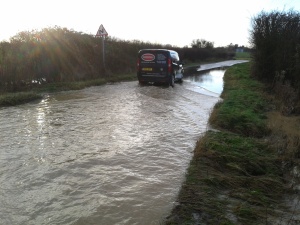 With a flourish, I carried the bike over the final section, planted it on more solid ground and looked back on this small achievement.  So much more satisfying than turning back!

I quite like winter rides like this – it’s the unpredictability that keeps things interesting.  Providing risk is sensible, there’s usually fun to be had.  Back at the top of the hill, the late sun made for a nice final snapshot: 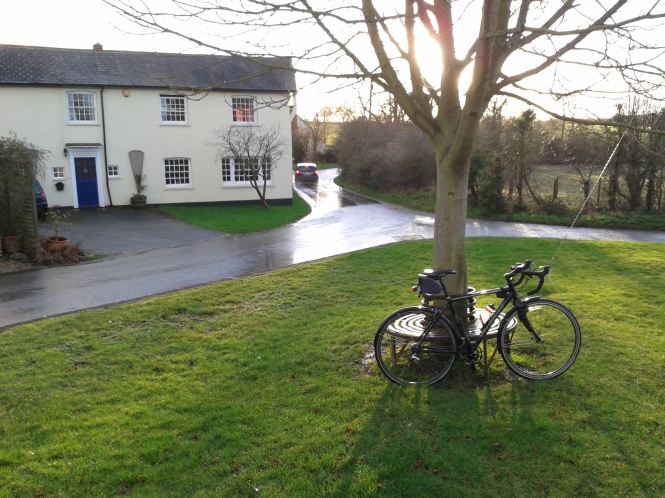 Rather shaky mobile phone video after our lunch stop. Next time, I’ll use a Flip camera!

A brilliant sunny morning but with frost and ice around made me doubt if there would be any takers, so I was delighted to find six riders for the first leg to Coggeshall.  We took a route via Channels, Terling and Silver End and enjoyed elevenses at the Vineyard Café after 21 miles.  John and Margaret were already there and joined the group bringing our numbers up to 8.

After elevenses at The Vineyard  (click on image for larger size)

A shortish ride of about 9 miles to The Alma at Copford took in Great Tey and Aldham  We were very pleased to find David and Beryl there having forsaken their bikes due to the conditions and travelled by car. 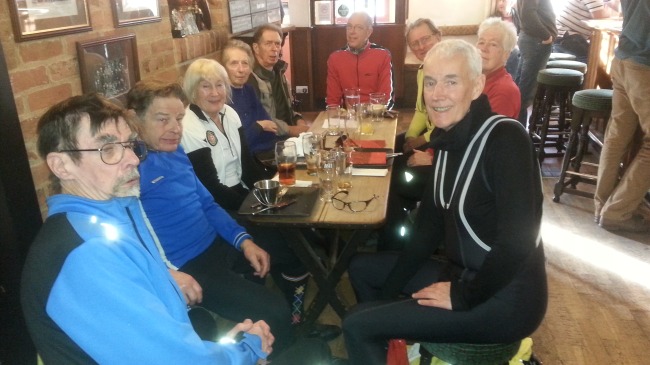 Lunch at The Alma, Copford (click on image for larger size)

The wind was strengthening from the SouthEast which was a bit unfortunate as we were heading for our tea stop at the Woodlands.  Sadly we also lost the bright sunshine after lunch, but at least the rain approaching from the SouthWest held off.  We reached Chelmsford as dusk was coming down at 4.15pm having covered 52 miles.

Here is a link to my Strava record:

Here is a link to my Strava record of the ride:

I’m afraid I forgot to do a ride report for this one!  However in outline we had a small but select group which managed to dodge the icy patches and get to Perrywoods for elevenses.  However we had had enough by then and as the ice had not all gone we came home by the most direct route – the A12 cycle tracks which at least were free of ice!  Sadly though none of the remedial work to the tracks or the proper signing of the route as promised by the Highways Agency have been done.

Here is a link to my Strava record of the ride